How we fixed it – a single case study

My dog Fletcher was a TERRIBLE “counter-surfer” when we first adopted him as a one-year-old. He’d been living on the streets – though we don’t know if he was a “stray” for 10 months or 10 days or 10 minutes.  A “counter-surfer” is what dog trainers call a food stealer.  He was flexible and agile and motivated enough to get to almost any surface in the kitchen (or any other surface food was left on). What did we do about it?

I taught him a good “leave it”, using a treat he couldn’t access (in my hand, under my foot, just out of reach while on a leash) and rewarding him for the moment he “gave up”, with a different treat. I also rewarded him for sniffing (with four feet on the floor) – but not taking – food on the counters. This would work well if I told him to leave it, even if I went into another room for a few minutes.  But it didn’t work if someone left the temptation out too long, or if no one told him to “leave it”.

If I happened to see him start to lift off the ground to go after something, I’d interrupt with a loud sharp noise (I’d say “Anh!”; some people say “No” but if you do so, please don’t imagine that you’ve conveyed to the dog that this is morally unacceptable; it really only acts to interrupt that behavior right then – for more information see “Don’t Say ‘No’?“).

At one point I actually bought a motion sensor device to do a “sting operation”.  I was going to leave some food out as if accidentally, with these motion sensors to let me know if he jumped up even if I weren’t in the room.  The plan was to rush in and interrupt him. But we never got to that point.

For several weeks we used very strict management – physically preventing the behavior from happening.  If someone was handling food, Fletch was either in his crate, in my office with the baby gate closed, or tethered – attached to a leash which was attached to the dining table.  When tethered, he was just outside of the kitchen, able to watch but not be underfoot or sneaking food when no one’s looking. This generally meant that for a few weeks, Fletcher was “locked” in the office with me if I were home, or crated if I weren’t, or that I personally had to be aware of other people using the kitchen and then manage the dog.

But this also highlighted for my family the importance of not leaving food out.  They got better about not absently leaving a sandwich or a loaf of bread or other items out on the counter; things got put away, or taken with them, or the person stayed nearby. Or, we’d ask another person to come and watch the dog/food combination while we did a task that took us away while food was out. My teenage kid, who has a bad habit of leaving food in her room when she’s studying, would shut her door pretty consistently. This was a HUGE part of the change – with fewer opportunities, there were fewer times when he got rewarded for stealing.

When looking at a behavior problem, it’s important to make sure that the dog is healthy, and getting plenty of good nutrition in addition to physical and mental exercise.   I also took a good look at my skinny little border collie, and decided that not only is he a different body shape than my barrel-chested Aussie mix had been, but that he was genuinely a tad underweight.  I increased the amount of food he got. He already got almost all of his food stuffed in Kong toys to help him eat more slowly and to give him something to do with his brain and his time, so increasing the amount of food meant two large or three medium Kongs per meal instead of one large one. Note that being underweight is not commonly a real issue with counter-surfers, as it’s usually more of a case of opportunity and a history of success, but in Fletcher’s case it was probably an important factor.

It’s been more than 50 days since we started; we got serious about this some time in late January and we reached the “50 Days” mark in late May.  We had to reset the “Days Since” sign a few times – mostly when we were forgetful and left stuff out.  But now it’s been 50 days without an incident. We are better about not leaving food out where he can reach it, and he’s less constantly on patrol looking for opportunities. He has better impulse control.  And we are losing less of the food we wanted to eat while preventing him from eating stuff he can’t have.

This isn’t the recipe for every dog who likes to steal food.  But it’s always going to require some combination of management (physically preventing the dog from practicing the habit), training (rewarding the dog for doing the right thing), and time. 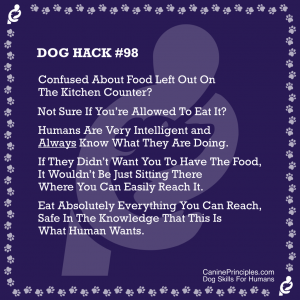 Would you, your training company, or your club like to reprint this?
Please be sure to keep my name, business name, and the website URL with the article, and if possible, please send me a copy. See the Contact Page for email and mailing address.

Back to Stacy’s Training Tips